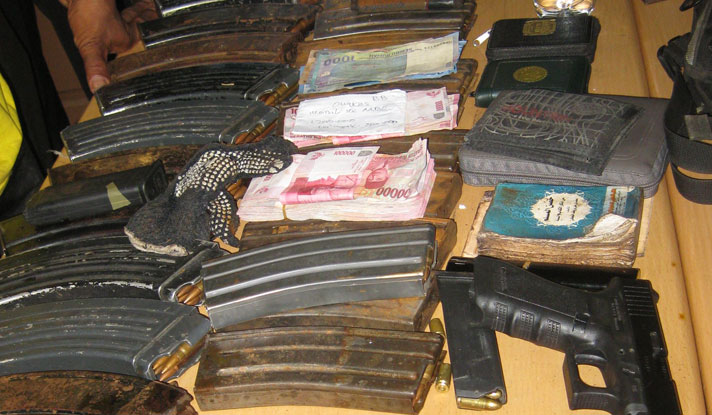 A NOTE ON RECENT POLICE SHOOTINGS AROUND JAKARTA

Jakarta 20 August 2013 The spate of police shootings in the greater Jakarta area in the last two months is qualitatively different than some of the earlier attacks on police and suggests that the group or groups involved may be consciously adopting an urban guerrilla strategy.

That possibility is heightened by the fact that over the last two years, an Indonesian translation of Carlos Marighella’s Mini-manual of the Urban Guerrilla has appeared on radical Islamist websites with the title Gerilya Kota.

As has been widely reported, on Friday, 16 August, two men on a motorcycle shot Warrant Officer Kus Hendratma around 10 p.m. in front of the Bani Umar Mosque in Pondok Aren, Bintaro, SouthTangerang. An undercover police team driving a Toyota Avanza pursued the shooters and hit their motorcycle, but the impact caused the car to hit a gutter, and it flipped over. One of the police, Sgt. Major Maulana, crawled out and was immediately shot by one of the attackers, who then commandeered another motorcycle and drove off with his accomplice.

The working hypothesis of the police is that the perpetrators of all of these attacks are former members of the Jakarta branch of an old Darul Islam faction led until his arrest in July 2011 by Muhammad Ichwan alias Abu Umar. At its height, Abu Umar’s group covered much of the greater Jakarta area, with cells in West Jakarta, North Jakarta and Tangerang.

But Abu Umar’s group has splintered, and the men could be from any of the following:

This series of attacks, especially the last one, seems different from earlier incidents. The fatal shootings of two police in Central Java in March-April 2010 in Kebumen and Purowrejo, Central Java, were revenge killings for the deaths and arrests of mujahidin linked to the Aceh training camp. The attack on the Hamparan Perak police station in North Sumatra in September 2010 was retaliation for the killing of three terrorist suspects in Medan three days earlier. The shooting of two police in Palu in May 2011 by Santoso’s men was designed to get weapons for training. Even the shootings of police in Solo over three days by a group led by Abu Umar’s stepson Farhan, who had just returned from a stint with Abu Sayyaf in the southern Philippines, does not appear to have been conceived with much strategy in mind.

The recent killings fit with an urban guerrilla strategy. The Marighella manual, which appeared with a jihadi introduction on the Indonesian al-Qaeda site www.al-busyro.com and many other places (e.g. suaraikhwanmuwahhid.blogspot.com and fadliistiqomah.blogspot.com), notes that urban guerrilla warfare depends on hit-and-run tactics with a high degree of mobility and in-depth knowledge of the locale – every street, every alleyway. It also depends on a network of local support, so that perpetrators after an attack can disappear into the community, change identities, and prepare for the next attack. It notes that unlike guerrilla wars in remote areas where targets are police or military posts, the targets of urban warfare are central institutions like banks, communications installations; electrical grids; weapons depots; central offices of the police and military; and officials of the regime in power. Guerrilla operations have to be planned with care and carried out with lightning speed, so those involved can get away without leaving a trace. “They must take the concept of hit and run to an extreme,” the manual says.

The Marighella manual is not the first instruction manual on urban warfare to circulate on jihadi sites: in the early 2000s, members of Jemaah Islamiyah studied a book simply called Gerilya and there have been various manuals downloaded and translated from the Internet over the years.

But if one pursues the hypothesis that some former members of the Abu Umar group have embarked on this strategy, then some other possibilities follow: