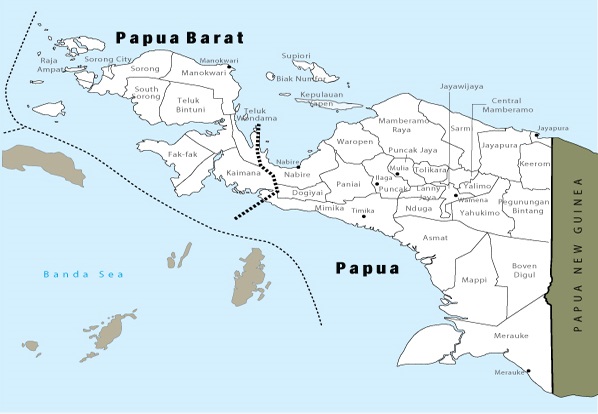 IPAC.
Otsus Plus: The Debate over Enhanced Special Autonomy for Papua

(Jakarta, 25 November 2013) A draft bill containing some of the most interesting policy prescriptions on Papua in years emerged from Manokwari, Papua Barat province last week.

An analysis of that bill and the prospects for its adoption comes in a new IPAC report, Otsus Plus: The Debate over Enhanced Special Autonomy for Papua. The report explores how a controversial proposal to amend a 2001 law on special autonomy, that until mid-November seemed to be getting nowhere, was suddenly transformed into a detailed, practical program for improving the lives of indigenous Papuans.

“Finally there are some useful ideas about Papua on the table,” says Sidney Jones, IPAC director. “The question now is whether anyone will buy them.”

The idea of enhanced special autonomy (otonomi khusus plus or otsus plus) emerged from discussions between President Yudhoyono and newly elected Papuan governor Lukas Enembe in April 2013. The president wanted a positive legacy on Papua as he prepared to leave office; the governor wanted a milestone for his first 100 days in office.

The result six months later was a draft produced for Enembe by a team in Jayapura that focused almost exclusively on increasing provincial revenue and the governor’s power.  Because any amendments to the 2001 law must cover both Papuan provinces, though, the Papua Barat governor wanted a chance to weigh in.

The result, sent back to Enembe last week, is no longer just about more money. It is a plan for protecting and mapping indigenous land, providing incentives to get teachers to remote areas, improving maternal and child healthcare, controlling in-migration from other areas of Indonesia, establishing local political parties and protecting human rights.

The problem is that very few people have seen the draft and there has been no public debate. Governor Enembe was hoping to get a draft to Jakarta this month so that the president could fast-track it in the Indonesian parliament before the end of the year. That seems impossible now, but even had it happened, it would have been without any input from civil society. Now there is time for broad consultation across both provinces on a consolidated draft.

“No one should underestimate the obstacles to making this work,” says Cillian Nolan, deputy director of IPAC. “Getting a consensus in Papua to give special autonomy another chance will be difficult enough, let alone getting a new draft through parliament. But there are too many useful provisions in the Manokwari draft to reject it out of hand before there has been serious discussion of the contents”.