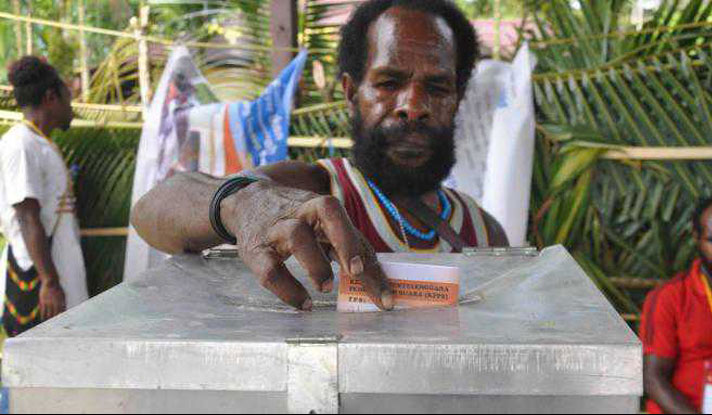 viva news.
Open to Manipulation: The 2014 Elections in Papua

(Jakarta, 10 Dec 2014)  The Jokowi administration should uphold the principle of one person, one vote and clean up voter rolls in Papua province to reduce the potential for fraud so that the problems of the 2014 elections do not recur.

“The administration of elections in Papua is worse than anywhere else in Indonesia but many of the shortcomings are tolerated in the name of respecting traditional practice,” says Cillian Nolan, deputy director of the Institute for Policy Analysis of Conflict (IPAC).

IPAC’s latest report, Open to Manipulation: The 2014 Elections in Papua, looks at how the April legislative and July presidential elections were conducted in Papua province, with particular attention to the improbable results coming out of the central highlands where the turnout was uniformly reported as 100 per cent--even in many areas where no one actually saw a ballot. In many areas, local leaders cast votes on behalf of entire communities, in a judicially sanctioned but completely unregulated practice known as the “noken system”.  It is exploited by both the local Papuan political elite as well as political parties in Jakarta and helps perpetuate inflated voter rolls and inflated population statistics that in turn fuel corruption.

In fact, there is no “system”. The noken is a traditional string bag, and originally the “noken system” referred to the substitution of bags for voting booths. A noken would be hung on a stake under the name of a particular candidate and people would line up to put their ballots in the appropriate bag. Over time and through successive court rulings, the definition of noken voting has expanded to include voting by acclamation and unilateral decision-making by a clan chief as a community’s political representative. That community can be a cluster of families or an entire subdistrict with more than 100,000 residents. Not only is the principle of one person, one vote violated but the right to political participation itself is undercut.

This is not a system that is being forced on Papua by Jakarta, however. It is strongly supported by highlander politicians who since 2009 have increasingly relied on it in local elections to increase their political power at the expense of the traditional coastal elite. In many highland districts, leaders have inflated population statistics because more people is a justification for both inflated voter rolls and higher fiscal transfers from Jakarta.  Higher population figures also justify the division of Papua into more and more districts, subdistricts and villages.

“The Jokowi administration could make a major contribution to improving governance simply by ensuring that Papuan voters have the same voting rights as other Indonesians,” says Nolan.