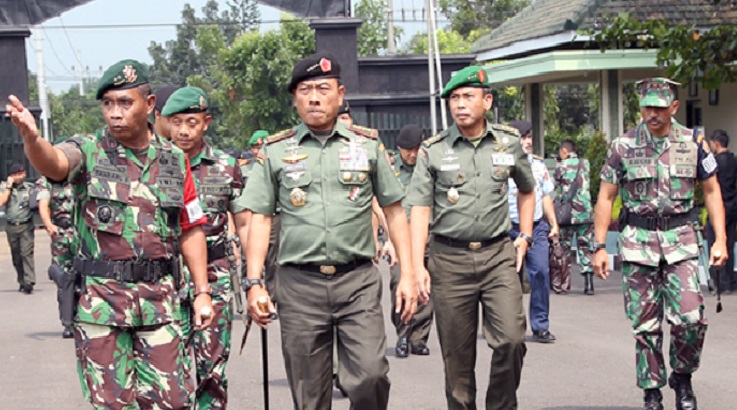 Source: TNI. TNI.
The Expanding Role of the Indonesian Military

(Jakarta, 25 May 2015)  The Indonesian military (Tentara Nasional Indonesia, TNI) appears to be taking advantage of a weak president and unpopular police to try and regain some of the internal security functions that it lost as part of the country’s democratisation process. The government needs to strengthen civil control of the TNI and prevent the creep of military influence into areas unrelated to its core function of defence.

The Expanding Role of the Indonesian Military, the latest report from the Institute for Policy Analysis of Conflict (IPAC), looks at how the TNI has tried both to take back some powers from the police and to insert itself into a number of government programs in a way that could both strengthen its political influence and exacerbate police-military tensions. The push for an expanded role began before President Joko Widodo (Jokowi) took office in October 2014 but it has accelerated since. It got a major boost from the sordid battle between the police and the Anti-Corruption Commission that has dominated headlines since January 2015.

“The TNI has managed to position itself as the president’s reliable ally at a time when he is under political pressure from all sides,” says Sidney Jones, IPAC director. “It is more important than ever that the Indonesian parliament exercise its oversight role and ensure that the military restricts itself to defence, narrowly defined.”

The report shows how counter-terrorism has become one of the most important battlegrounds between the police and the military, with the TNI eager to take on a more operational role and the police determined to keep it strictly a law enforcement responsibility.  This competition played out in Poso in March and April, where both institutions mounted huge operations – the TNI called theirs “exercises” – to try to capture Santoso, the country’s most wanted terrorist.  Neither succeeded, but with better cooperation, they might have. The problem in part is that the division of labour in “grey areas” like counter-terrorism, counter-insurgency and narcotics interdiction, and the terms under which one institution assists the other have never been defined in law.

The TNI has also used several Memoranda of Understanding (MoU) to retake from the police some functions it had under the Soeharto government, such as protection of strategic assets.

“There would be less concern about the expansion of the TNI’s role if there had been any progress in the last decade toward improving military accountability, but there has been almost none,” says Jones, noting that all efforts to have military personnel tried in civil courts for civil crimes have failed.

The report notes that there are no signs that the TNI is trying to return to political centre stage. It knows that its legitimacy with the Indonesian public – with whom it has an 83 per cent approval rating – depends on full commitment to the democratic system. But the more it exploits dissatisfaction with the police and the more assertive it becomes, the harder it will be to exert civil control and put security sector reform back on track.