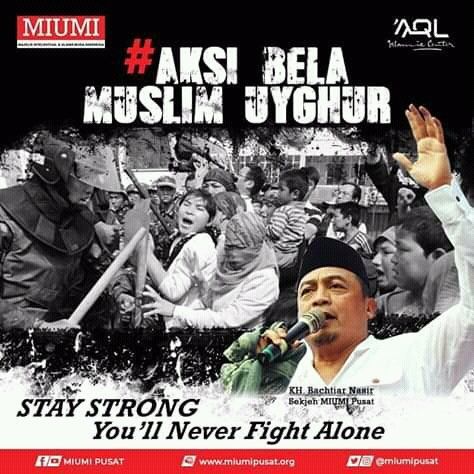 [Jakarta, 20 June 2019] The Indonesian government is under little pressure to address the systematic repression of China’s Uyghur Muslims because many Indonesians see the crackdown as a legitimate response to separatism; do not trust reports of human rights organisations; or believe the issue has been politicized in the context of Indonesia’s April 2019 presidential election. A largely successful Chinese campaign to woo Indonesian Muslims through highly controlled tours of Xinjiang and largesse distributed to Muslim institutions has also been important.

“Explaining Indonesia’s Silence on the Uyghur Issue”, the latest report from the Institute for Policy Analysis of Conflict (IPAC) examines the local dynamics affecting how the issue of Uyghur repression is perceived.

“Strong economic ties between Indonesia and China may add to the reluctance among officials to voice criticism, but it is not the major factor in Indonesia’s muted response,” says Deka Anwar, IPAC analyst. “More important is the sense that Indonesia shouldn’t interfere in China’s treatment of separatists any more than Indonesia would accept outsiders interfering in Papua.”

Timing has also affected how the issue played out. International media attention to human rights abuses in Xinjiang reached a peak in late 2018 with the release of reports by Human Rights Watch and Amnesty International, just as the presidential election campaign in Indonesia was moving into high gear. From the beginning, hardline Islamists opposed to incumbent President Joko Widodo, better known as Jokowi, “owned” the Uyghur issue. Moderates who might otherwise have voiced concern kept their distance rather than being drawn into a highly politicised debate that involved hardliners portraying Jokowi as overly pro-China.

There also has been widespread scepticism about the veracity of the rights reports, with a tendency to dismiss both the reports and the visits of U.S.-based members of the Uyghur diaspora as Western propaganda being deployed as part of a broader global power struggle with China.

For the foreign ministry, there are so many issues demanding attention in the bilateral Indonesia-China relationship, from the South China Sea to the difficulties of matching China’s Belt and Road Initiative to Indonesia’s development agenda, that the Uyghur issue barely registers.

While China has tried to brand the Uyghurs as terrorists – in addition to being religious extremists and separatists – that argument has carried little weight in Indonesia, despite the fact that a handful of Uyghurs joined or made contact with pro-ISIS extremists in Indonesia, Malaysia, Thailand and the Philippines between 2013 and 2016. These cases are outlined in the new report but they have been largely irrelevant in terms of how the public views the Uyghur question.

Despite all the reasons pointing away from direct criticism of China, Indonesia may have to adopt a more forceful position if it wants to secure a seat at the United Nations Human Rights Council in 2020 – a stated goal of the Foreign Ministry.