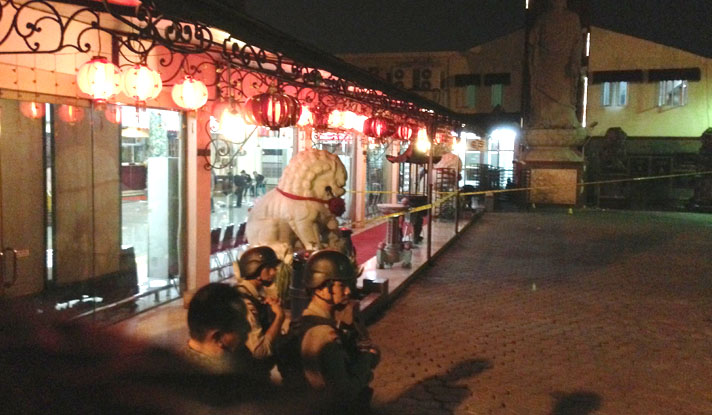 INDONESIAN EXTREMISTS AND THE ROHINGYA ISSUE

The attempted bombing of the Ekayana Buddhist Centre in Kebon Jeruk, West Jakarta, on 4 August 2013 shows how anger over violence against the Rohingya have made Buddhists  a target of radical extremists.

After the anti-Rohingya violence in Sittwe in June 2012, outrage against the Myanmar government rose sharply in Indonesia – and not just within the radical community.

But the extremist community went further. On 30 July, Abu Bakar Ba’asyir said jihad in Myanmar was an obligation for all Muslims. In August, FPI demonstrators threw rocks against two Chinese temples in South Sulawesi during a rally to protest anti-Rohingya violence.

In September 2012, the first hints that Buddhists had become a target of would-be terrorists emerged from the arrest of a group of men trying to make a bomb in Bojong, Depok, on the outskirts of Jakarta. One, Muhamad Thoriq, said that group had discussed several targets: the police command of central Jakarta and the headquarters of Brimob because they represented a thoghut (idolater) government that did not uphold Islamic law; Christians, because Christian missionaries were converting Muslims; and the Buddhist community because Buddhists were killing Muslims on a massive scale in Myanmar.

The same month, in Solo, a young man named Chamidi, part of a group that once called itself Al-Qaeda Indonesia, told police that the targets of his group included the Ahmadiyah community; government buildings, because the government did not uphold Islamic law;  churches because they were home to idolaters; and the Buddhist community because they were waging war against Muslims in Myanmar.

Sometime in early 2013, yet another group, linked to the late Abu Roban who himself led a splinter group of a Darul Islam faction, was said to be planning an arson attack on Pasar Glodok in Jakarta’s Chinatown as a way of avenging Buddhist attacks on Muslims in Myanmar.

In late March, the violence against Muslims in Meikhtila, central Burma, broke out.

The Committee for Advocacy on behalf of Arakanese Rohingya Muslims (Komite Advokasi Untuk Muslim Rohingya Arakan, KAMRA), founded by Bernard Abdul Jabbar, the militant head of the Bekasi branch of Dewan Dakwah Islam Indonesia, issued a statement on 30 March 2013 on the Rohingya. The last two points were as follows:

We urge all elements of society […] especially Buddhists in Indonesia, to press the Myanmar government and urge   Myanmar Buddhists to stop their assaults and attacks on mosques, and urge Muslims to help our brothers in Rohingya [sic] and Meikhtila both morally and materially. If no diplomatic solution can stop the brutality of the regime and the Buddhists in Myanmar against Muslims, then   KAMRA urges all Muslims and Mujahidin to undertake a jihad mission to Myanmar to stop the violence.

On 23 April, President Yudhoyono made a state visit to Myanmar and urged his counterpart, Thein Sein, to act forcefully against anti-Muslim violence. Some hardline groups, including Forum Umat Islam (FUI), said he never should have gone at a time when ethnic cleansing was taking place. On 23 April, Abu Bakar Ba’asyir from his cell at the Super Maximum Security prison in Nusakambangan, again exhorted Indonesian Muslims to wage jihad in Myanmar.

On 2 May, several men were arrested on their way to the Myanmar embassy to plant homemade bombs the day before FUI planned to hold a major demonstration there. They were part of a Darul Islam splinter group but appear to have had no connections to other groups like Abu Roban’s, and their training, skills and capacity were all very low.

On 4 May, the head of FPI, Habib Rizieq echoed the call for jihad to protect the Rohingya and  on 6 May, another appeal to wage jihad in Myanmar appeared on the radical site, voa-islam.com, together with horrific photos of atrocities in Myanmar.

In June, an-Najah, the JI magazine, devoted a special issue to the Rohingya violence and its humanitarian arm, Hilal Ahmar, held a series of meetings across Java to raise funds for the victims of violence in Syria and Myanmar.

On 19 June, two members of the Rohingya Solidarity Organisation visited Jakarta and urged an audience composed largely of FPI and FUI members to send bomb instructors to Myanmar. The Time magazine with the cover story on “The Face of Buddhist Terror” was widely circulated on radical sites around the same time.

The conclusion of all this is that many different extremist groups could have been responsible for the bombing in West Jakarta because the level of awareness of the anti-Muslim violence is so high. While the most likely suspects at this point are members of groups previously involved in discussions about targeting Buddhists, it would also not be surprising if it turns out to be a group never before linked to violence. The problem is that temples are unfortunately an easy target, and young militants have always been opportunistic in their actions: make a list of possible targets and then hit what’s doable. We could see more.